Introduction to the Staff at Trinity Lutheran Church 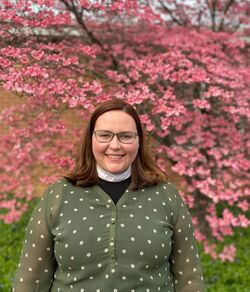 "My favorite part about ministry is serving the congregation and community through all of life's ups and downs. It's a joy to see people of all ages build their relationship with Jesus, dig into the Bible and serve their neighbors in love."

She is a native of Pennsylvania. She grew up in Pottsville and attended Trinity Lutheran Church there. She first discerned a call to be a leader in the church in high school but wasn't sure if she wanted to be a pastor until she entered seminary. She majored in Religion and Women's Studies at Susquehanna University and went to Luther Seminary in St. Paul, MN. During that time she considered becoming a youth director, missionary or deacon. She participated in service learning trips to Costa Rica, Nicaragua, Liberia and the Philippines and did service work in New Orleans, LA after Hurricane Katrina. In the summer between university and seminary, she worked as an intern for the ELCA World Hunger in Chicago, IL.

On June 4th, 2015, she was ordained and began to serve a small rural congregation in Blair County, PA. After 5 years in ministry there she began a new call as an interim pastor at another small rural congregation in Bedford County, PA, for a year and a half. She was called by God and the people of Trinity Lutheran Church in McAlisterville on January 16th , 2022 and began serving as pastor a month later.

She and her beloved, Greg, were married on January 11th, 2020. They own a dog named Marley and a cat named Jude. She is an only child to Mike Ward and Pamela Leib and loves being a step-sister to all 4 of Greg's brother and sisters. She is a first-generation American on her father's side. Mike hails from Hertfordshire, England. She enjoys singing, crafting and reading. She likes walking, hiking and going geocaching with Greg. She likes to travel both across the country and across the world.

She is passionate about hunger ministry and serving our neighbors both near and far. As a Child of God, she continues to learn and grow in her faith and seeks out God's justice and peace for all people. Her favorite Bible passage is from the book of Romans:

"For I am convinced that neither death, nor life, nor angels, nor rulers, nor things present, nor things to come, nor powers, nor height, nor depth, nor anything else in all creation, will be able to separate us from the love of God in Christ Jesus our Lord." - Romans 8:38-39 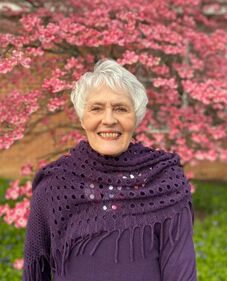 Betty Lou was baptized at Trinity Lutheran in 1949. In 1973, she joined the McAlisterville UMC and rejoined Trinity in 2018. She has been the parish secretary for Trinity since August 1993.  She says, “A lot has changed since then. I am very grateful for my job, and the friendships and happenings that have come through this church office over so many years. It is a fun place to work.”  She is very grateful for the pastors she has worked under and the Sonbeam Early Learning Center.

Jessica Startzel, Director
Jessica Startzel is on the Sonbeam Early Learning Center Director Team and has been with Sonbeam for almost six years. She lives locally in McAlisterville. She is married and has a daughter that’s 16 and a son that’s 4 years old. She is currently enrolled for her associate’s degree and works full-time at the center. Her background before childcare was in intravenous pharmacy. She was the pharmacy supervisor for 12 years. For many years, she has volunteered with the home and school locally and with AWANA as a leader. Her hobbies outside of work include gardening, cooking, and spending time with her family.